In this article, I will describe each feature in C# NEXT Feature Status and demonstrate them with examples.

The milestones C# 8.1 and C# 8.2 were removed from GitHub, probably to prevent speculation on a release date or which features could be released in the next version. We have seen in the last years a lot of new features. That causes a lot of trouble, and it was a big challenge for the .Net developer team. The most problems came from the legacy code or to keep the compatibility between the existing programming concepts and the new concepts.
C# NEXT, as shown below, contains the candidate features for C# 8.1 .. 8.x. Only if the candidate features in the “master” branch, that means the feature will be released in the next version. 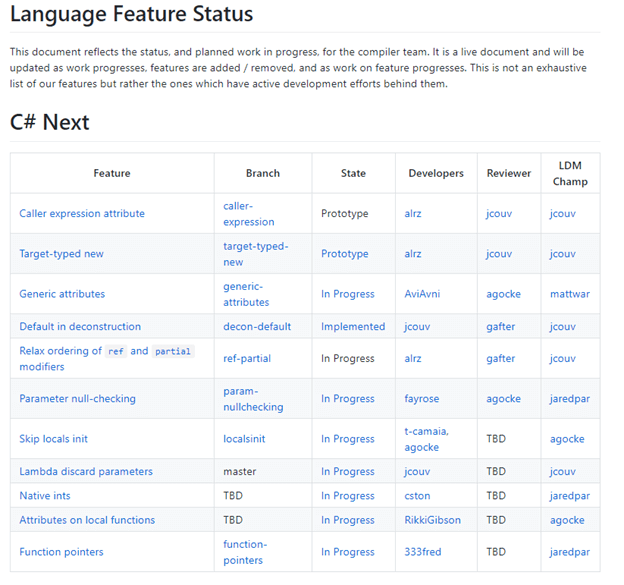 Allows the caller to ‘stringify’ the expressions passed in at a call site. The constructor of the attribute will take a string argument specifying the name of the argument to stringify.

“var” infers the left side, and this feature allows us to infer the right side.
Example
Mads example

Allows the generic type in the C# ‘Attributes’.

Allows the partial keyword before ref in the class definition.
Example

Allows specifying System.Runtime.CompilerServices.SkipLocalsInitAttribute as a way to tell the compiler to not emit localsinit flag. SkipLocalsInitiAttribute is added to CoreCLR.
The end result of this will be that the locals may not be zero-initialized by the JIT, which is in most cases unobservable in C#. In addition to that stackalloc data will not be zero-initialized. That is definitely observable but also is the most motivating scenario.

Introduces a new set of native types (nint, nuint, nfloat, etc) the ‘n’ for native. The design of the new data types is planned to allow a one C# source file to use 32 naturally- or 64-bit storage depending on the host platform type and the compilation settings.
Example
The native type is depending on the OS,